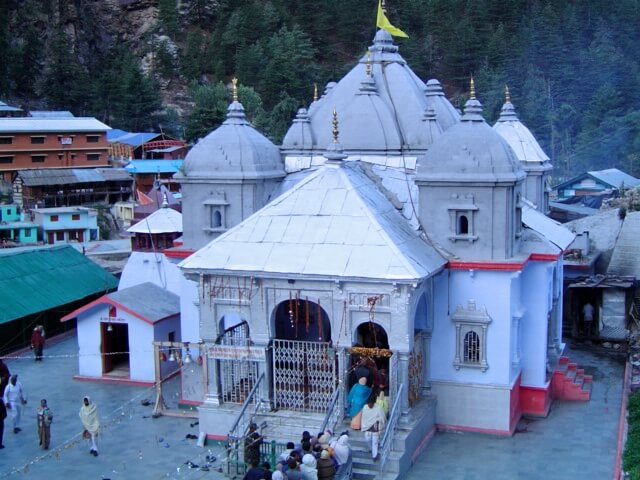 “Gangotri Temple” is located at a distance of 100 km from Uttarkashi district of Uttarakhand, India. According to mythological beliefs, the place where the mother Ganga on the earth came to be known as “Gangotri Tirtha” is known. Gangotri is considered as the origin of Ganges river situated in Uttarakhand state. (History of Gangotri Dham) This is the second sacred place of Char Dham Yatra, which comes after Yamunotri Dham. Gangotri Temple is a holy and pilgrim place for Hindus. Gangotri Temple is situated on the banks of river Bhagirathi. This temple is located on the Greater Himalay Range at an altitude of 3100 meters (10,200 ft). This place is the source of river Ganges. Gangotri Temple is India’s most prominent temple. The source of Ganga in Gangotri is estimated to be at an altitude of 4,225 meters in Gangotri Glacier, about 24 kilometers from here. Temple of Ganga and holy places like Sun, Vishnu and Brahmakund are here.

According to the history of Gangotri Dham, “Goddess Ganga” touched the earth at this place, according to the Chakravarti king Bhagirath of Lord Rama Chandra’s ancestor Raghukul, sitting on a sacred pillar there had been a great austerity of Lord Shiva.

The other belief is that the Pandavas had also brought a great devotion to the place of spiritual peace of their families killed in the Mahabharata war. (History of Gangotri Dham!)

“Gaumukh”, located 19 kilometers away from Gangotri, at an altitude of 3,892 meters above sea level. This is the origin of Gangotri Glacier and the source of river Bhagirathi. It is said that after bathing in the water here, all sins are washed away.