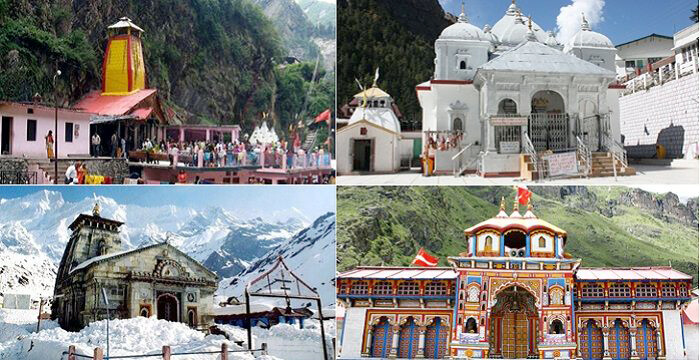 While planning a Chard ham Yatra, you must be thinking of exploring some other nearby attractions to enjoy the natural beauty closely. But due to the time limit and busy hectic schedule that doesn’t allows you to go somewhere out of the track, you have to keep your steps back of exploring the other beautiful must visit destinations. Here is the solution of this problem that allows you to explore several other imposing and sanctified charms that comes en route, that too without wasting any time. To leave no stone unturned, take a look on the major tourist attractions that come on your way towards the four holy shrines without going anywhere else located in Uttarakhand:

On The Way to Yamunotri

On The Way to Uttarkashi

This is an ancient holy city located on the banks of River Bhagirathi. Uttarkashi is adorned with many beautiful temples and ashrams. Pilgrims heading to Gangotri usually stop by at Uttarkashi for a day to seek blessings from the God. Here are some religious places to see in Uttarkashi.

On The Way to Gangotri

Gangnani (Hot water spring): Gangnani is a hot water spring located at a distance of around 46 kilometers from Gangotri shrine. It is an engrossing destination for the devotees seeking tranquility of mind. The hot water spring here is known as Rishikund and it is believed to be necessary to take a dip here before embarking towards Gangotri.

Bhairon Ghati: Situated close to the confluence of Bhagirathi River and Jat Ganga, Bhairon Ghati is a scenic place 10 kilometers from Gangotri. There is a Bhairon Nath Temple here, which is cosseted by lush forests. One can reach Bhairon Ghati by crossing Jahanvi River and then moving uphill.

Harsil: is the virgin and pristine jewel of Uttarakhand. It offers ample of sightseeing opportunities to tourists seeking tranquility. Spouting flow of River Bhagirathi, salubrious environment, peaceful ambiance and twittering of birds are the prime attractions of this region.

The route then reaches to holy Gangotri shrine where one can witness the consecrated charms like Submerged Shivling, Gomukh Glacier and Bhagirath Shila

Submerged Shivling is made of natural rock, which is submerged under water. It is an enticing tourist destination. This Shivling can be easily observed by devotees during winters as the water level goes down during this time. As per the Hindu mythologies, Lord Shiva received Ganga in his hair at this place.

Gomukh Glacier is the source of River Ganges. It is a scenic spot. It resembles to the face of a cow and hence known as Gomukh. It is believed that the trek to Gangotri is incomplete without taking a bath at this glacier. The spot is extremely astounding and hordes of tourists swarm it every year.

Bhagirath Shila is a holy place where the great sage Bhagirath carried out a long term penance to bring Ganga on the earth. Thus, this place holds a great important among Hindus. The platform, on which Bhagirath sat, is still present here.

On The Way to Kedarnath

Kalimath is one of the most renowned temples with traditional and cultural significance. It is dedicated to Goddess kali and positioned at an astonishing elevation of 6000 feet. The holy river Saraswati touches this temple and interestingly there is no idol of Goddess kali here. There is just a silver plate, which is revered as homage to Goddess Kali.

Guptkashi is located at a distance of 47 kilometers from Kedarnath. This religiously significant town is on the western side of Mandakini River. The trek to Kedarnath commences here. This town boasts sacrosanct Ardhanarishwara Temple.

Ardhanarishwara Temple is dedicated to Lord Shiva and includes the idol in which Lord Shiva is depicted in half-female and half-male form.

The route, on moving further, reaches to holiest shrine of Lord Shiva- Kedarnath. After visiting Kedarnath, the devotee has to return Guptkashi. In the midst of route, if time allows, one can go to explore Sonprayag, Triyuginarayan and, Gaurikund which comes on the way to Guptkashi.

Sonprayag: Sonprayag is a sacred spot located at an altitude of 1829 meters on the route to Kedarnath. Positioned at the confluence of Mandakini and Basuki rivers, Sonprayag holds an immense importance in Hinduism. It is believed that one can attain emancipation by taking a dip in the holy water of this sacred spot.

Triyuginarayan: This temple is believed to be even older than the holy Kedarnath Shrine. It is located a few kilometers away from Sonprayag. There is a fire that is kept alive here. It is said that the ‘Phere’ of the Lord Shiva and Goddess Parvati took place around this consecrated fire. The arti conducted here is a unique point of attraction for the devotees on the way to Kedarnath.

Gaurikund has a great significance among the devotees of Lord Shiva. As per the mythological beliefs of Hindus, it is the place where wife of Lord Shiva- Goddess Parvati, carried out penance to win over the heart of Lord Shiva. Gaurikund is located at an altitude of 1982 meters.

On The Way to Badrinath

Chopta is also known as mini Switzerland of Garhwal. It is the starting point of trek to Tungnath. It offers arresting vistas of imposing Himalayan range comprising Chaukhamba, Nanda Devi and Trishul.

Mandal Valley is a beautiful valley located on the route to Pipalkoti. It is a picturesque spot to get dipped into gorgeous beauty of nature and to rejoice the scenic vistas.

On the way from Pipalkoti to Badrinath, there are many tourist attractions that a devotee can savor. These attractions include Joshimath, Hanuman temple, Narshingha Temple, Yogdhyan Badri at Pandukeshar.

Joshimath is a famous hill station as well as revered pilgrimage destination. This town is also named as Jyotrimath. The sacred rivers Dhauliganga and Alaknanda meet just below the Joshimath.

Hanuman Mandir at Joshimath is a sanctified pilgrimage spot for Hindus. It is dedicated to Lord Hanuman and has a mention in holy epic Ramayana as well

Narshigha Temple of Joshimath is dedicated to Lord Vishnu. This temple is almost 1200 years old. A unique point about this temple is that at the commencement of winters, the Badrinath deity is bought here in a procession. This idol is then kept in Narshingha Temple for the period of six months.

The place enroute to Badrinath is famous for its ancient temple of Lord Hanuman. According to legends, this is the place where Lord Hanuman crumpled the ego of Bheema, second of five Pandava brothers of Mahabharata. A true devotee praying to Lord Hanuman in this temple is granted with all his wishes.

Yog Dhyan Badri at Pandukeshar: Yog Dhyan Badri is a sacrosanct temple located in Pandukeshwar. Pandukeshwar is the place where King Pandu, the father of the Pandavas, did meditation. There are three idols placed in the temple. These idols are of Lord Vishnu, Madri and Goddess Laxmi. It is believed that Lord Indra presented the idol of Lord Vishnu to Arjuna after being pleased by his meditations.

The pilgrim, on moving forward, reaches to holy Badrinath Shrine. At Badrinath, other than the auspicious idol of Badrinath, one can also visit the other sacred and spectacular charms like Tat Kund, Brahma Kapal, Narad Kund, Bheem Pul, Vyasa Gufa and Ganesh Gufa.

Tapt Kund is a thermal water spring well known for its healing traits. This kund is believed to be the abode spot for Lord Agni. According to Hindu Beliefs, it is important to have a plunge into Tapt Kund before proceeding towards Badrinath Shrine.

Brahma Kapal is sacred spot in Badrinath. It is a flat base situated on the bank of Alaknanda River. At this place, the devotees pay homage to the souls of their ancestors. It is positioned at a distance of 100 meters in the northern direction of Badrinath Shrine.

Another vital religious spot in Badrinath, Narada Kund is situated near the Tapt Kund. As per the Hindu Beliefs, it is the place where the great saint Narada Muni wrote Narada Sutras. Narada Kund is covered by a rock that relucts the flow of water.

Bheem Pul, located opposite to Vyasa Gufa, is an enormous rock which serves as natural pathway across the river Saraswati. It is said that Bheem, who was one of the five Pandava brothers, threw a splendid rock in order to make a bridge so that Draupadi could walk over it easily.

Mana Village – It is the last Indian village before Tibet and is home to the ‘Vyas Cave’ and ‘Ganesh Temple’. It is believed that great sage Vyas while composing the Mahabharata took the help of Lord Ganesh to write it in a great speed. Vyas Cave and Ganesh Temple are associated with this legend.

Vasudhara Falls – These beautiful falls can be reached through a 6 km. trek from the Mana Village. Captivating views of snow clad Himalayas and glaciers feeding the Alaknanda River are just a sight to behold at the Vasudhara Falls.

Back From Badrinath to Rishikesh

Rudraprayag is at the confluence of two sacred rivers Mandakini and Alaknanda. It is one of the five confluences of Alaknanda known as Panch Prayags. This renowned town offers the scintillating panoramas to the tourists.

Srinagar This beautiful town is situated on the banks of Alaknanda River and is famous for its ancient temples. Details of two of the most revered temples are listed below.

Devprayag is also among the Panch Prayags and embraces the confluence of Bhagirathi and Alaknanda Rivers. This town is located on Badrinath-Rishikesh Highway. Devprayag is the seat of the priests of Badrinath shrine.